Action of Rudder in turning a ship and its three phases

We all know every ship has a rudder which helps in turning the ship and is always at the stern of the vessel after propeller. To understand the turning of the ship and how rudder turns the ship, lets assume that the helmsman has given rudder some angle to the starboard side.As soon as the helmsman gives rudder some angle to the stbd side, then at very moment a lift force acts on the rudder which is directed along the traverse direction to the ship in port side.

When the rudder moment acts about the ship's CG, it slightly changes the ship's orientation by giving it a drift angle. See above figure. The ship with that drift angle is moving along the initial direction.From above fig it can be seen that the ship's velocity has two components. One is Surge velocity in longitudinal direction and other is Sway velocity in traverse direction.
With a sway velocity towards port side, the hull sways towards port. When it does so, it exerts a force on the water particles that are in its port side.The water particles in return, exert an opposite force on the ship's hull, due to inherent inertia of the water particles.The magnitude of this inertia force is equal to the displacement of the vessel to gain the equilibrium.This inertia force acts on the ship's hull in stbd direction.
This inertia force can be categorized into two. One half acting at the bow (Fwd of the CG) and other half at the stern (Aft of the CG). See the below figure. 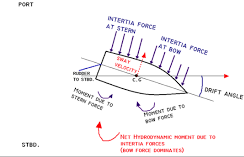 The inertia force at the stern will create a moment towards port side about the CG and forces at bow will create a moment towards stbd side about the CG. The hull is designed in such a way that the inertia forces at the bow is more than that at the stern. And thus the resultant moment is towards the stbd side. And this resultant moment turns the ship in the desired direction.
Labels: Action of rudder Lift force rudder function in ship rudder work on a plane types of rudder rudder working principle rudder work on a ship ship rudder definition ship rudder design Ship turning

Unknown said…
Thanks for such an platform for preparation of exams and enhancing our knowledge.

Could you please provide answer for the undermentioned question

ashish said…
Isn't the answer incomplete until you write about the 3 phases of turn ? Maneuvering, evolutionary and steady state phase.
2 March 2017 at 18:03

Unknown said…
Turning Circle
(in Russian, tsirkuliatsiia sudna), the path of the center of gravity of a ship when the ship’s rudder is turned through some angle and held in that position. The Russian term tsirkuliatsiia sudna is also frequently applied to the process of turning a ship.
The turning of a ship consists of a maneuvering phase, an evolutionary phase, and a steady-state phase. The maneuvering

Figure 1. The turning path of a ship and the main parameters of the ship’s turning circle
phase coincides with the time interval during which the rudder is swung. The evolutionary phase lasts from the moment the rudder is held at a constant angle to the moment the elements of the ship’s motion cease changing with time. During the first two phases, the path of the ship’s center of gravity is a line of varying curvature; during the steady-state phase, the path is a circle (Figure 1).
The elements of a turning circle are the steady-turning diameter D, the tactical diameter DT, the advance l1, the transfer l2, and the offset l3. The determination of these elements is an important step in the evaluation of a ship’s maneuverability. The course of a ship cannot be plotted, especially during maneuvers, if the elements of the turning circle are not known. An element of a turning circle is determined by computation and is checked during sea trials.
31 March 2017 at 19:50

Also if someone has got the answer for this question kindly forward the link.

Unknown said…
This is a very informative information. Thanks for it. Can please share the main source where I can study it thoroughly.