The traditional agent employed to move a ship is a propeller. The necessary propeller thrust, T, required to move the ship at speed V, is normally greater than the pertaining resistance Rt. The thrust of a propeller depends on its size, the angle of attack of its blades and the speed at which it spins. By convention, propellers are described by diameter and pitch in that order. The diameter of propeller is governed by its speed of rotation and the power of the engine rotating it. For example a 20 H.P. engine would drive a 14 inch propeller at about 1500 rpm. If the propeller had too  small surface area for the power provided it would over speed and cavitate at high revolution, providing little or no thrust. Pitch is dictated by the propeller’s speed of rotation, its percentage of slippage, and the speed required from ship.

The diagram power vs shaft speed, the so called propeller curve, contains useful information about the working point of the main engine and the propeller. 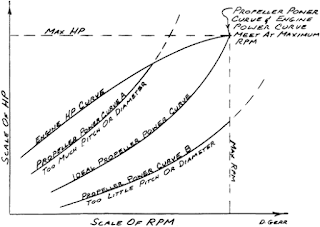 The diagram above shows the propeller curve. The X axis is of scale of RPM and the Y axis is the scale of HP. Now there will be a maximum HP and Maximum rpm for the engine. Curve A shows propeller power curve with too much pitch or diameter. With this pitch and diameter the engine will not be able to drive the propeller at given RPM. Curve B shows propeller power curve with too little pitch or diameter. This will cause the cavitation and over speed of the propeller at rated horse power. Which I have already discussed. The propeller with ideal pitch/diameter ratio will be the one whose propeller power curve and engine HP curve meets at maximum RPM.
So, a propeller curve is a very much significance for chief engineer. From the curve he can easily make out that for the particular engine power what will be the maximum rpm at which he can run the engine to get good propeller efficiency. In case of fixed pitch propeller, when operating in heavy weather condition, the propeller performance curves i.e. the combination of power and speed (rpm); will change according to the physical laws and the actual propeller curve can not be changed by the crew. But in case of controllable pitch propeller the pitch can be altered to suite the conditions outside and best propeller efficiency can be achieved. For this the chief engineer will require propeller curve. 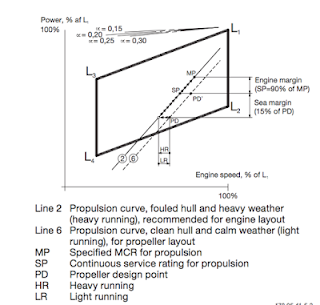 1. Sea Margin( SM) (approximately 15% power)
The increase in power to maintain a given ship’s speed achieved in  calm weather (point ‘A’ ) and under average service condition (point ‘D’), is defined as the ‘sea margin’. This margin can vary depending on owner’s and charterer’s expectations, routes, season and schedules of the ship. The location of the reference point ‘A’ and the magnitude of the sea margin are determined between the shipbuilder and the owner.
With the help of effective antifouling paints, dry-docking intervals have been prolonged up to 4 or 5 years. Therefore, it is still realistic to provide an average sea margin of about 15 % of the sea trial power.
2. Light running margin (LR)
It is the compensation for loss in RPM between dry docks for constant power operation .
The sea trial performance (curve ‘a’) in figure should allow for a 4 to 7 % light running of the propeller when compared to the nominal propeller characteristic (the example in figure shows a light running margin of 5 %). This margin provides a sufficient torque reserve whenever full power must be attained under unfavourable conditions.
The recommended light running margin originates from past experience.  It varies with specific ship designs, speeds, dry docking intervals, and trade routes. Therefore the ‘light running margin’ required will be 5 to 6 %. This is the sum of the following factors:
a) 1.5–2 % influence of wind and weather with an adverse effect on the intake water flow of the propeller.
b) 1.5–2% increase of ship’s resistance and mean effective wake brought about by:
• Rippling of hull (frame to frame).
• Fouling of local, damaged areas, i.e. boot top and bottom of the hull.
• Formation of roughness under paint.
• Influence on wake formation due to small changes in trim and immersion of bulbous bow, particularly in the ballast condition.
c) 1% frictional losses due to increase of propeller blade roughness
d) 1% deterioration in engine efficiency such as:
• Fouling of scavenge air coolers.
• Fouling of turbochargers.
• Condition of piston rings.
• Fuel injection system (condition and/or timing).
Increase of back pressure due to fouling of the exhaust gas boiler, etc.

3. Engine margin (EM) or operational margin (OM)
Contractual speed is 90 % MCR for most engines. This is the margin allows the  vessel  to  increase  speed  above  the contractual  speed.  Most  owners

specify the contractual ship’s loaded service speed at 85 to 90 % of the contract maximum continuous rating. The remaining 10 to 15 % power can then be utilized to catch up with delays in schedule or for the timing of dry docking intervals.

4. Shaft Generator Margin (SG) :-
It is given in case a shaft generator is fitted.

Unknown said…
Good answer i could not answer this in my august written exam and this was complusary qn to attained.thanks i can now do this if this qn comes
18 January 2013 at 00:51

kumar said…
I also appeared in august only. At that time i did not write this much.but somehow i passed.

oceangoer said…
hi Avin!
this was a real good material on propeller curves. I am doing my preparatory course & find the website God sent! or should I say Avin Sent! Great work! saves a hell lot of time while looking for answers.
Thank you!
3 March 2013 at 12:16

kumar said…
Thanx for encouragement frend. I went thru same trauma at my time so I decided to help my fellow frends.
Thanx
3 March 2013 at 17:18

JUZAR said…
Thanks a lot avin, the answer suffies for the querries of written questions but for orals need a lil more material if there is a question on propellers....
19 January 2017 at 12:31

Anonymous said…
Generatorsideas can provide you help if you want to buy best portable generator
13 September 2017 at 22:28

Anonymous said…
Generatorsideas can provide you help if you want to buy best portable generator
13 September 2017 at 22:29